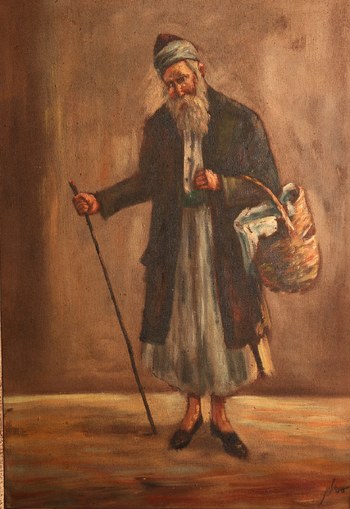 The influence of Judaism and Jewish culture on the Western world goes back as far as the 4th century, when Christianity became the official religion of the Roman Empire. For this reason, though the Jews were frequently depicted in Medieval fiction in an unfavourable light, they were sometimes seen by Europeans as bearers of wisdom and mystical knowledge. This view was prominent in Italy during The Renaissance, when numerous philosophers and mystics, including Pico della Mirandola and Johann Reuchlin, had an interest in Kabbalah.

In the subsequent centuries, the trope declined in prevalence due to increasing anti-Semitic tendencies within Europe, but rose to prominence again in the nineteenth century in the light of romanticized Orientalism. It reached another peak in popularity after the Second World War, when derogatory portrayals of Jews were no longer considered acceptable, and the Jewish characters were usually depicted sympathetically.

In more modern works, such a character would often be an Eccentric Mentor due to the adoption of humorous Jewish tropes like Alter Kocker, Jewish Smartass, and Jews Love to Argue. This is also the type of character who's likely to create a golem if the story depicts golems in their original Kabbalic context.

Compare Magical Negro, Magical Romani, Magical Asian, and Magical Native American; contrast Greedy Jew, another century-old Jewish stereotype in Western culture. Subtrope of Magical Minority Person and Religion Is Magic. To qualify for this trope a character needs to serve as a mentor figure to another non-Jewish (or less traditional) character.