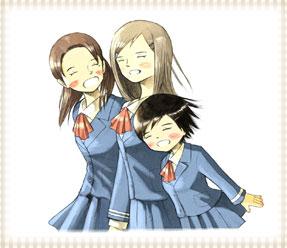 An accident caused the Japanese space program's manned rocket, the Lion, to crash into Yuigahama. Asumi Kamogawa, who was one year old at the time, survives the incident, protected by her mother Kyouko, who is badly burned and falls into a coma.

Five years later, Kyouko dies without ever having regained consciousness. After the funeral, Asumi meets a strange man wearing a lion head from a mascot costume and playing a harmonica. Although she doesn't believe him at first, he is the ghost of one of the astronauts killed in the Lion incident. Between her teacher and her father telling her that dead people become stars, and talking with Lion-san, she decides to become a "rocket driver" when she grows up.

To that end, Asumi applies to the prestigious and expensive Tokyo Space Academy, to enroll in the newly created astronaut training course. During the rather unusual entrance exam, she meets Marika Ukita and Kei Oumi. At the same time, her childhood friend Shinnosuke Fuchuuya, who has followed her to the school, meets Shuu Suzuki, and the five of them eventually form a group.

Since this is a whole new area of study for this level, the teachers and administrators are feeling out what needs to be done and learning as much as the students are. This leads to some rather odd training scenarios combined with the more expected. It doesn't help that one of the teachers knew Asumi's father.

The main story line covers Asumi and the others during their time at Tokyo Space Academy, but there are numerous flashbacks to earlier periods.

The anime is only 20 episodes long, with a non-ending. It follows the manga fairly closely until the end of the anime, but only covers part of the first five volumes, most of what was out at the time. Given the length differences, many of these tropes only apply to the manga.

A Live-Action Adaptation produced by NHK aired in the summer of 2009. Vertical has released the entire manga in the US, but it's not in print anymore due to low sales, so some physical volumes might be very expensive nowadays. They are available from Amazon as Kindle e-books.

Tropes applied in this series: