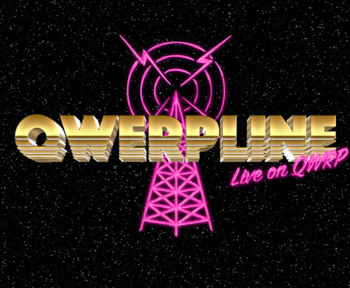 They don't tell you the news so much as they live it.
Good morning, Nsberg!
Advertisement:

Qwerpline is a show from LoadingReadyRun: A (fictional) community radio broadcast for the citizens of scenic Nsburg, in Therpston county, airing on QWRP FM. Hosted by Graham (G-Money) and Alex (A-Train), the show features all you'd expect from a small town community radio — tales of public interest, calls from concerned citizens (despite the staff's determined efforts to disconnect the station's phone line), and hard-hitting on-site reports delivered by QWRP's summer intern Derek (including, on one memorable occasion, an interview with QWRP's summer intern, Derek). Of course, it probably doesn't help that everyone in Nsburg seems to be insane, with the two radio hosts being the Only Sane Men in town.

Qwerpline is a creation of the crew at LoadingReadyRun, featuring Graham, Alex, Beej, Kathleen and Ian voicing the various characters. It is released periodically on their channel on YouTube

and iTunes. The show is (mostly) unscripted and improvised (or, as they call it, "scriptorvised"), with occasional lines re-recorded to be cleaned up. The series is currently in hiatus following the COVID Pandemic. The series is available both as Podcast format and as a new addition, in animated form (for some episodes), on YouTube starting August 2019.