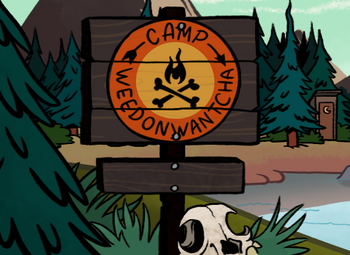 "Campsite...the one with the name that sounds like somebody gave up halfway through naming it. Uh... Camp Flabanabba!"
— Morty, Rick and Morty, "The Whirly Dirly Conspiracy"
Advertisement:

A common trope in the Camping Episode is for the camp to have a Punny Name or otherwise vaguely Native American-sounding name. Usually an exaggeration of the many Native American-named camps in Real Life. May or may not overlap with Horrible Camping Trip to accentuate the horrible-ness of the trip.

May overlap with Summer Campy.