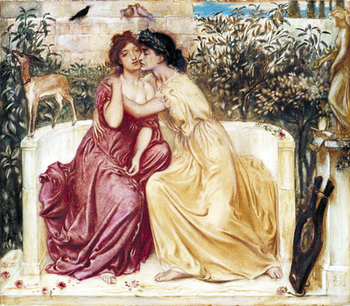 Sapphism (adj. sapphic) is a retool term that refers to women who have romantic and/or sexual attraction to other women.

The term comes from famous Greek poet Sappho who kept a cadre of women she admired and loved with her on the island of Lesbos. Using the term sapphic in communication is useful to reduce presumptive errors about another person, both in sexual orientation and gender identity.

Sapphic differs from lesbian because sapphic explicitly includes any women attracted to women, whereas many define lesbian as only including women exclusively attracted to women. Nonbinary people who identify with womanhood, or even just with sapphicism, are included in these labels as well.

There's an ongoing debate within the sapphic community over whether "lesbian" is more inclusive than women who only love women.

Usage of the term has gained popularity in progressive and LGBTQ spaces, especially as a less gender-restricted term. Some transgender people prefer to use the terminology to describe themselves if they identify as wholly or partially female and/or non-binary. In this way, they can escape a lot of the excessively-gendered tropes attached to the term, such as Butch Lesbian and Lipstick Lesbian.

In general, the term is also used to avoid attachment to scores of previous organizations and movements that have flavored and defined what it truly means to be "lesbian" or a woman who likes women.