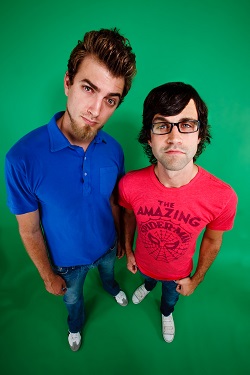 "Hello, mythical beasts! We have our own page at TV Tropes!"
"Let's talk about that."
— Rhett, Link or Guest at the beginning of nearly every Good Mythical Morning episode
Advertisement:

Rhett & Link are entertainers who primarily use the Internet to display their talents. They like to call themselves "Internetainers."

Charles Lincoln Neal and Rhett McLaughlin first met on the first day of first grade in Buies Creek, North Carolina, when they were held in class during recess as punishment for writing profanity on their desks. They quickly became best friends. Throughout their childhood and adolescence, they went to the same schools and even dated some of the same girls (not at the same time, of course). During their college years, they both pursued engineering degrees (civil for Rhett, industrial for Link) and shared a dorm room. They also made videos with a VHS-C camera and played them at their weekly Campus Crusade meetings.

for their main videos and the other

. They also have a third

) and making-ofs/real-world footage respectively. They sell their own albums, T-shirts, coffee mugs, and even original shoes through partnerships with Tweak Footwear and DFTBA Records. They even receive sponsorships for some of their videos. In 2011, they had their own TV show called Rhett & Link: Commercial Kings, which aired on IFC. In 2016, they created a new series for YouTubeRed called Rhett and Link's Buddy System, which currently has two seasons. More recently, they've come out with the comedy-horror novel The Lost Causes of Bleak Creek in 2019, and the number of food-based episodes of "Good Mythical Morning" inspired the creation of Inside Eats with Rhett and Link, premiering on Discovery+ in 2022.

But they have not forgotten their roots. Though they both now have their own individual homes and families, they still hang out like when they were children, and they even made a documentary of themselves searching for their teacher from first grade.

Rhett or Link: You know what time it is...
Troper: It's time to spin the Wheel of Trope-icality!