Webcomic / The Adventures Of Joe The Circle 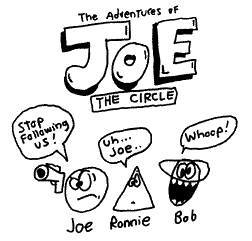 Adverbly verbed by Mike Shapiro
"Action! Adventure! Excitement! Geometry! All this and less can be found within the virtual pages of Joe the Circle, the only psuedo-science-fiction comic that takes less than five minutes per episode to draw!"
Advertisement:

The Adventures of Joe the Circle was an early Science Fiction Web Comic by Mike Shapiro. Originally printed in Shapiro's college newspaper in the early '90s, it first appeared online in 1995. It followed the adventures of Joe, a violent, gun-toting circle, along with his companions: Ronnie, an even-tempered triangle; Bob the Boobian, a dimwitted . . . thing with a gaping maw and limited vocabulary; Franko, a clairaudient flying fish; and Bert Smert, a laid-back gearhead who provided the crew's transportation.

The comic was rather crudely drawn, but made up for it with freewheeling storylines, goofy humor, and extremely quotable dialogue. Most of the comics can be found at www.joe-the-circle.com

, with a few older issues accessible through archive.org

Incidentally, you may have encountered Shapiro's work in another form. He's a composer

in Real Life, providing music for films and Video Games, at least one of which can be found on This Very Wiki.