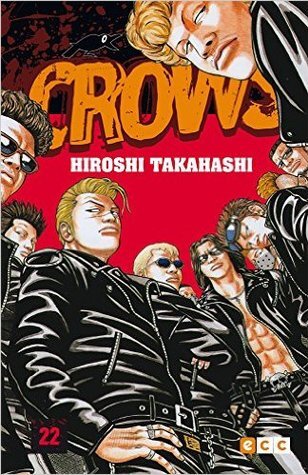 "There's nothing wrong with being a Crow. When you compare them to the poor caged birds that have forgotten how to fly, Crows are much better."
Advertisement:

Crows is a Japanese high school delinquent manga series by Hiroshi Takahashi, which ran in Monthly Shonen Champion from 1990 to 1998. The story begins when Harumichi Bōya transfers into the second year at Suzuran High School. Suzuran is notorious for its delinquent students who are nicknamed 'Crows' because of their dark uniforms and inauspicious nature. Quickly enough Bōya meets a group centered around Hiromi Kirishima who are trying to challenge the school boss Hideto Bandō. From there the story follows the exploits of Suzuran students and the teen-aged delinquents of various surrounding schools and gangs.

The series was adapted into two-episode OVA by Knack Productions which cover the first three volumes of the manga. Spawned three live-action films: the Takashi Miike directed films Crows Zero (2007) and Crows Zero 2 (2009), and Crows Explode (directed by Toshiaki Toyoda) in 2014. The films are not direct adaptations but take place before the events of the manga. Several characters from the manga appear in the movies but not the main character Bōya.

Hiroshi Takahashi also wrote a continuation called Worst, which ran in Monthly Shounen Champion from 2002 to 2013. In 2019, the series had a live-action crossover with the similarly gang-themed High&Low franchise for its fifth film installment, HiGH&LOW: The Worst. That movie takes place sometime after the main series, following a new generation of Hosen Academy characters as they go up against SWORD's Oya High School.