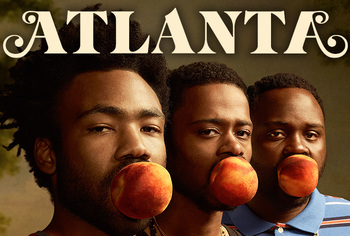 Atlanta is a series created by and starring Donald Glover, set in the eponymous city of Atlanta, one of the top cities for young rappers looking to make a name for themselves in the business.

Among those up-and-comers is Alfred Miles (Brian Tyree Henry), a hot new artist going under the rap name Paper Boi, who is trying to understand the line between real life and street life.

He is managed by his cousin, Earnest "Earn" Marks (Glover), who gets caught up in the local rap scene and his cousin's career after returning home to Atlanta. Earn does whatever he can to try to get Alfred's career to the next level. Darius Epps (Lakeith Stanfield), the rapper's right-hand man and visionary, is also in Alfred's entourage.

When Earn isn't busy managing his cousin's career, he spends much of his time with ex-girlfriend Vanessa Keefer (Zazie Beetz), who is also the mother of his daughter.

While nominally a comedy, Atlanta might be best described as "Twin Peaks but set in the South" as it blends drama, Magical Realism and horror together into a mix as complex as the city it's set in. The series is very experimental, often having episodes with strange subplots or highly symbolic interactions contrasted with weird, quirky asides. The series is also filled with social commentary on racism, black culture, and the rap scene in general.

The series is set to air for four seasons, with the most recent third season airing on March 24th, 2022. The final season is set to air in Fall 2022.

Darius: I dunno, I feel like that's more easily pulled off by white men that are assumed to be dangerous, right. Like Jason Statham, Bruce Willis, The Rock... Same reason why Black dudes can do it as well..."
Feedback

Example of:
Where da White Women At?