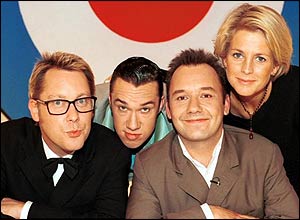 From left to right: Vic Reeves, Mark Lamarr, Bob Mortimer, and Ulrika Jonsson.
"I've been on some loony shows in my time, but this one takes the cake."
— Larry Hagman, after appearing on the show in 2002.

Brainchild of British surrealist comedians Vic Reeves and Bob Mortimer, and a loving parody of British celebrity Panel Games. The questions made little sense, the answers made no sense, and the top prize could be as much as £120.

The show was hosted in a traditional Panel Game format, with Vic and Bob in the middle acting as quizmasters and two teams on either side, headed a regular team captain. Team B was always hosted by TV presenter Ulrika Jonsson, while Team A was initially hosted by greasy-haired 1950s throwback Mark Lamarr (who himself hosted the Panel Game Nevermind The Buzzcocks for over a decade) and later by English intellectual and novelist Will Self. Comedian Johnny Vegas became a regular contestant on Ulrika's panel. The scores would be read out by George Dawes, a giant baby played by Matt Lucas (later the star of Little Britain). Sometimes George's mother, Marjorie, (also played by Lucas) would take over.

The show followed roughly the same format each time. After an initial song and dance, Vic and Bob would introduce the team captains, and voiceover man Graham would read out a short biography of the guests. These rarely said what the guests were famous for and were usually just a tissue of lies (for example, that singer Alvin Stardust hid for 30 years inside a cow).

There would then follow a question-and-answer round, where the answers were almost impossible to guess correctly (e.g., "True or false: Cupboard doors open outwards"; the answer is "false" because the question is asked from the perspective of a trapped cat). After this, there would be a random selection of other rounds including video rounds, in which the contestants must answer a question based on a short sketch; impressions rounds in which Vic sings a song in the style of an incoherent nightclub singer and the guests must guess what it is; and the interpretive dance round in which a guest must express something through the medium of dance.

However, the most popular section was the "Dove From Above" round in which the guests would call down a shoddily-made prop dove with question topics growing from its body. If the contestants answered the question incorrectly, Vic would pull a face and say "UVAVU"; if they chose a special category he would pull a different face and say "ERANU". This, of course, resulted in much imitation in schools and workplaces across the UK. Sometimes the topic would signal "George's Song", in which George would take centre stage and sing a song on various topics including potatoes, peanuts, hip-hop and lesbians. Variations on The Dove from Above included The Crow from Below, The Vest from the West, The Beast from the East and George Dawes from the Upper Floors. The Dove was replaced in later series by a succession of "guest stars" (such as the Crow from Below and the Fly from On High), then the Wonderful, Wonderful Car, a tiny remote-controlled car that fired questions out of its prosthetic arse, and finally Donald Cox the Sweaty Fox, who would make salacious remarks about Ulrika and the celebs. In 2009 the Dove was, at last, brought back — now sporting overly-tight shoes.

A 15th-Anniversary Special was broadcast on 30 December 2008 with most of the original cast returning and Jack Dee filling in as the captain of Team A. The result was a new series which began in August the following year, with a new regular guest panelist in the form of Angelos Epithemiou. In 2010, George Dawes left, and Angelos took over scoring. The show ended for the third time following its cancellation after the 2011 series.

A year later, Reeves and Mortimer attempted a Spiritual Successor to Shooting Stars entitled Lucky Sexy Winners for Channel 4, that only survived the pilot stage.