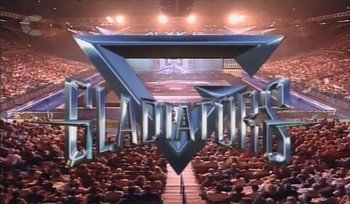 AWOOGA!
Do you feel the power of the Gladiators?
Can you face the challenge of the champions?
Do you have the courage of a hero?
Do you have the will and the skill?
Do you have the speed, the strength, the heart to be a winner?
It's not for beginners.
Deep down in your soul.
Are you a Gladiator?
—The lyrics for the opening theme of the show
Advertisement:

Gladiators was a popular ITV Game Show that inspired Britain to get fit again from 1992-2000, based off the original American Gladiators. There were Australian, Finnish, Swedish, South African, and Russian versions too, an international crossover series and a couple of Ashes series between England and Australia. The show was presented by Ulrika Johnson and John Fashanu for most of its original run. John Sachs, son of Andrew Sachs (Manuel), provided commentary. John Anderson was the referee for the original series.

A small group of contestants (usually two men and two women) would compete each week in a bunch of physical contests against the "Gladiators"- a group of very strong and fit men and women who were all known by a single word descriptor (e.g. Lightning, Warrior, Panther, Wolf). Since all these Gladiators were professional athletes and were very prominent and skilled in their fields, this meant they had a distinct advantage (though generally the games were not designed to be unwinnable). The series followed a type of knockout format which resulted in the winners of each show going into a semifinal and then a final. The final episode of the original series pitted Gladiator against Gladiator.

The appeal of the series (and of the franchise globally) could be put down to many factors. For one thing, it was a highly competitive and tense show involving some very hard games. The contestants were regular people who went up against the aforementioned trained and professional athletes, who weren't known for being soft-hearted. As a result, the Contenders were often the underdogs, which added to the stakes- and to the popularity. it was also a very adaptable show: while many a Game Show relies on the same proceedings each episode, the variety of events on display meant no two episodes would be the same. It also allowed for new events to come and go over the years, ensuring less predictability. One thing the UK version amped up was the theatrics, making it more like a drama or soap opera; as a result there were quite a few Professional Wrestling tropes present, but this was usually kept subtle, in order to ensure that viewers would continue to take it seriously. This allowed the show to be framed as a serious sporting event, helped by Saturdays being the UK's traditional sports day each week.

The show was revived in May 2008 (probably to due to nostalgia) on Sky1, where an all-new team of Gladiators took on a new group of Contenders. It was based on NBC's American Gladiators revival, which was based on the original British version, which was based on the original syndicated American Gladiators. (Got that?) The show brought back some classic events, replaced crash mats with water tanks, and included its own version of the Eliminator (complete with Travelator). It was presented by Ian Wright, with Kirsty Gallacher in 2008 and Caroline Flack in 2009, also included John Anderson as the referee for Series 1. It also hosted some Legends Specials, pitting the old Gladiators against the new Gladiators, which also saw the return of fan-favourite Wolf. Lackluster ratings and a lukewarm reception saw this show sent the way of a contender to the crash mats (or water tank).

In July 2022, reports of a second revival broke which would potentially see the show air on BBC One in 2023, with Holly Willoughby mooted as the show's presenter.

It's hard to really describe the popularity the show had, but to put it simply, it was the Game Show of its time! As has been stated in in other articles, if Bullseye was the UK's favourite game of the 1980s, then Gladiators was the choice of the 1990s. There were tons of merchandise seen in shops, the Gladiators became national celebrities- it was everywhere, an institution unto itself, so much so that when the revival did a Legends Special, the returning Gladiators were given a very warm and enthusiastic reception. Despite the poor revival it's still regarded very fondly by a lot of people, even if it was a bit cheesy. It rode the peak of the UK's Game Show craze of the 1980s and 1990s… and followed it down, too.

After playing six of these events (reduced to five in later series), the two Contenders (without any Gladiators) then competed in a race on "The Eliminator", an obstacle course whose features varied over the years but always finished with a dash up a 45° moving floor known as the Travelator; this quickly became the most notorious obstacle in the show, due to a lot of contenders finding themselves being unable to run up it thanks to fatigue. Most matches could be won or lost here, and several Contenders who would've had no chance of winning thanks to a huge gap could find themselves overcoming the deficit. The game was won or lost solely according to who finished the Eliminator first; the preceding events were played for points, the leading Contender having half a second's headstart on the Eliminator for each point they led by.

Has a few Professional Wrestling Tropes present, due to some degree of Kayfabe in the off-stage stuff.

For safety reasons, do not attempt to recreate any of the events you have seen on “Gladiators”.