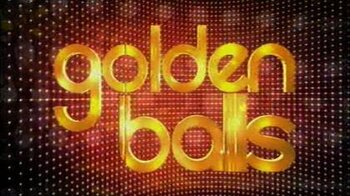 Early-evening ITV Game Show from the producers of Deal or No Deal, which bridged concepts from Deal with that of poker. To begin, 12 golden balls were drawn from a giant lotto machine-styled contraption known as the Golden Bank, which held 100 of them. These balls contained cash amounts that ranged from £10 to £75,000. The Lovely Assistant then mixed in four "Killer" balls, bringing the total to 16, and each of the four contestants received four balls at random.
Advertisement:

Each player opened up two of their balls for everyone to see, while the other two remained visible to the player only. The goal of the game was to ultimately build as large a jackpot as possible by keeping high-value balls in play. After the distribution of the first set of balls, the contestants proceeded to debate over who they believed had the worst hand (low-valued and Killer balls were the main targets), often defending themselves by outright bluffing about the contents of their other two balls, before proceeding to vote out a contestant Weakest Link-style and throwing their balls in the trash. In case of a tie, the contestants not involved in it tried to reach a consensus as to whom they wanted to eliminate; if they could not do so, a random draw decided who went out. If every contestant received one vote, they all continued debating until three of them agreed to kick out the fourth.

After the first elimination, the remaining 12 balls (along with two more balls from the Golden Bank and one more Killer, making 15) were re-shuffled and distributed again to the remaining three contestants. Each placed two balls on the front row and three on the back, and the second round followed the same rules as the first. After this round, one more Killer was added to give a total of 11 balls and the contestants took turns picking two at a time, the first to "bin" (eliminate) and the second to "win" (place in the jackpot). Kept cash amounts were added to the jackpot, but each kept Killer divided the jackpot by 10. After five "win" balls had been chosen, the round ended and the final jackpot was set.

But how much of the pot would each contestant get? Well, it's time to use an old favorite, the Prisoner's Dilemma. You've watched enough Friend or Foe to know how this works: the two contestants discussed their situation and tried to psych each other out, and then secretly chose to "Split" or "Steal". If both contestants chose Split, they split the jackpot. If one player chose Steal, s/he got to take the whole lot. If they both chose Steal, nobody won.

Golden Balls aired from 2007-09. The show was a Sleeper Hit for ITV at first, but began to taper off later on, resulting in its demise.