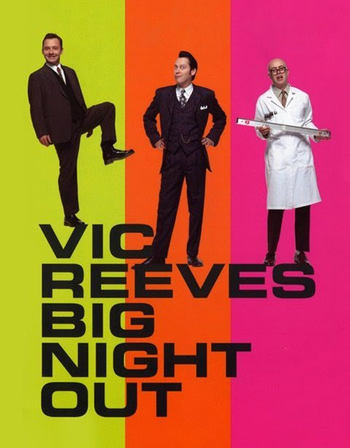 The first television outing for comedy duo Vic Reeves and Bob Mortimer, which ran for two series on Channel 4 from 1990 to 1991.

It was developed from a three-hour live neo-variety show which Jonathan Ross once went to see and then commissioned them to make a cut-down half-hour version for TV. Allegedly the idea came about because Reeves (real name Jim Moir) ended up running a conventional variety show, but worked out that he could save money if he fired all the acts and performed them himself.

Its fusion of surreal humour and Stylistic Suck made it an alternative comedy favourite (being particularly popular among students in the early 1990s), and rocketed the duo to stardom.

In the late 2010s it was revived under the name Vic and Bob's Big Night Out, and saw the return of many characters and sketches which the duo had not performed for years, such as Graham Lister, Judge Nutmeg and the Man with the Stick.

The show displays examples of: