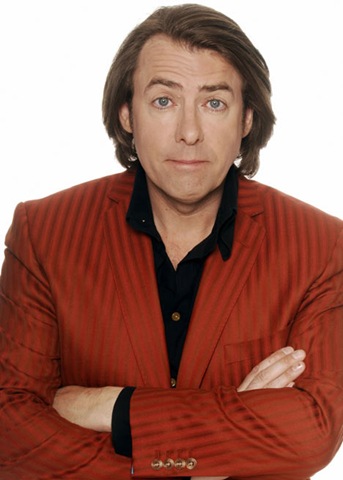 Jonathan "Wossy" Ross OBE (born 17 November 1960) is a British television personality and host. He is on every TV show.

His long-running BBC One chat show Friday Night with Jonathan Ross was temporarily suspended in 2008, following a series of abusive prank calls from Ross and Russell Brand to Andrew Sachs. Ross finally left the BBC formally in 2010. Many people joked that he would be on TV again after a couple of months anyway, and they were right: he currently hosts a new chat show on ITV. He's also presented the annual British Comedy Awards from 1991 to 2007, and 2009 onwards. Additionally, Ross is a Panel Show regular, including frequent appearances on Big Fat Quiz of the Year. (Which, to be fair, is produced by a production company owned by him and his wife.)

It is a matter of debate as to how far his career recovered after the nadir of "Sachsgate". In the opinion of many people, it was irreparably damaged, with people once well-disposed to Ross wanting him to join his brother, the now seldom-seen on TV Paul Ross, in obscurity and outer darkness. Others, including fellow comedians such as Russel Howard and Noel Gallagher, and even Andrew Sachs himself, believe the whole incident was blown out of proportion.

Famous for suffering from Elmuh Fudd Syndwome, which makes him incapable of pronouncing his own name.