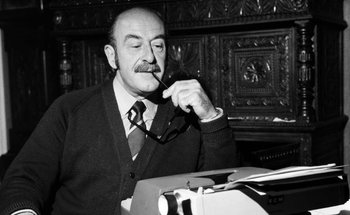 Tablot Nelson Conn Rothwell, OBE (12 November 1916 — 28 February 1981) was an English comedic screenwriter, mostly known for writing the scripts of many successful Carry On movies and a few of their television shows. He is also responsible for writing comic work for some of the UK's other classic properties, including material for Terry-Thomas and Frankie Howerd.

Rothwell had a variety of jobs before he went into show business. He turned to it after his RAF plane was shot down in the Second World War and he was imprisoned in a prisoner-of-war camp. There he met Peter Butterworth and they become a "double act" in the camp with Butterworth performing and Rothwell writing some of his material. When the war was over, the two remained friends, which most likely helped Rothwell make his way into drama, writing scripts for a variety of famous British comic acts, such as The Crazy Gang, Ted Ray for his eponymous television show, and Arthur Askley.

He decided to submit a piece he'd written to Carry On producer Peter Rogers, which later became the screenplay behind the movie Carry On Cabby and Rothwell became the scriptwriter of the majority of the films in the series, taking over from Norman Hudis, who moved to Hollywood. In between, Rothwell wrote for other comedy shows, most famously Up Pompeii, but retired from writing in the 1970s due to illness, and later died in 1981.

Rothwell's legacy to British comedy is known of nowadays from Up Pompeii and his work with the Carry On films, often being called the latter's best ever writer. With the tongue-in-cheek humor, Rothwell was said to be careful not to go into full-frontal pornographic content, keeping the content as Parental Bonus as possible without alienating the younger audience; the works of stand-up comic The Cheeky Chappie was said to have been much of his inspiration. One could link him to (unintentionally) pushing the envelope in the Carry Ons which eventually led to the Awful British Sex Comedy genre.

However, there is a bit of a Pop Culture Osmosis/Adaptation Displacement with his work: the famous line "Infamy, infamy — they've all got it in for me!" from Carry On Cleo was named the best line ever said in British comedy, however, it was a Shout-Out to a popular radio show Take It From Here, which is now unfortunately so obscure, the line is always credited to Rothwell, and not the writers Frank Muir and Denis Norden.