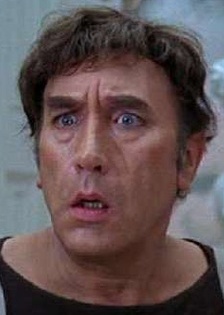 Francis Alick "Frankie" Howerd, OBE (6 March 1917 – 19 April 1992) was an English comedian and comic actor working in theatre, film and TV, whose career, described by fellow comedian Barry Cryer as "a series of comebacks", spanned six decades. Howerd presented a Camp Gay persona on screen, but never came out as gay during his life because of the fear of professional suicide; this was only revealed posthumously by his life partner Dennis Heymer.

His work includes the TV series and film versions of Up Pompeii, and two of the Carry On films.

Titter ye not at these tropes: