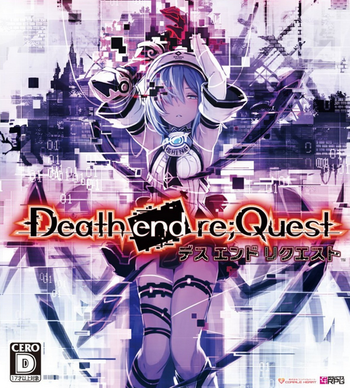 Death end re;Quest is a Role-Playing Game developed by Compile Heart as part of their "Galapagos RPG" line of games. It released for the PlayStation 4 on April 12,2018 in Japan, February 19, 2019 in North America, and February 21, 2019 in Europe. It was released on Steam on May 16, 2019 worldwide.
Advertisement:

The development of "World's Odyssey", a Virtual Reality Massively Multiplayer Online RPG (VRMMORPG) created by Enigma Games, halted following the disappearance of its director Shina Ninomiya. One year later, Shina finds herself in the bug-ridden game world with no memory of her past. She soon comes into contact with colleague and Enigma Games lead programmer Arata Mizunashi. Together, they seek to trigger World's Odyssey's Ending Engage so that Shina may log out of the game, battling oddities both inside and outside of the game all the while.

The game is known for its Genre-Busting gameplay, between the visual novel segments and Arata's ability to change the genre of the game, as well as the many ways to trigger a Non Standard Game Over.

A sequel, Death end re;Quest 2, released for the PlayStation 4 on February 13, 2020 in Japan. A worldwide Steam port was released on August 18, 2020, before a North American PS4 release on August 25, 2020 and European PS4 release on August 28, 2020. Death end re;Quest 2 takes place in Le Choara, a southeast Europe-styled town that is part of the real world of the original game, and follows Mai Toyama, Rotten Dollhart, and Liliana Pinnata as strange happenings and conspiracies surround their dorm.