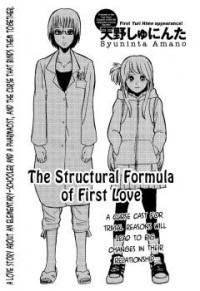 Thirteen years ago, Maki's girlfriend Misaki got knocked up and dropped out of school. In her despair, Maki pronounced a terrible curse: "May your child fall in love with me in your stead." Back in the present, Maki, now a successful pharmacist, finds herself besieged by Chisato—Misaki's frighteningly smart and industrious daughter—who proclaims her eternal love for her, completely unfazed by the fact that Maki can only see her as her friend's child.

The Structural Formula of First Love is a oneshot Yuri Genre manga by Shuninta Amano focusing on the strange intergenerational relationship between Maki and Chisato.