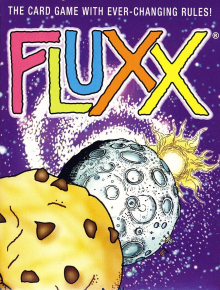 Fluxx is a Card Game with some fun (and unique) gameplay mechanics.

The basic rules are very simple — on your turn, you draw 1 card and play 1 card. Reading that, you may have noticed there is no rule for how you win. Don't worry, the rest of the rules are on the cards you play! Every card played has a rule that modifies the game you're playing, as you play it.note In other words, Fluxx is a "nomic

" game, where the point of playing is to create and change the rules of playing the game. Eventually, a player will play a card that will state the condition for winning (usually but not always a Goal), and the first person to meet the Goal in play wins. But the gameplay itself is a bit more unpredictable than that, due to a variety of card types and effects. Don't worry if the Goal seems out of reach. It's probably going to change. Often.

Cards in the game are split into: