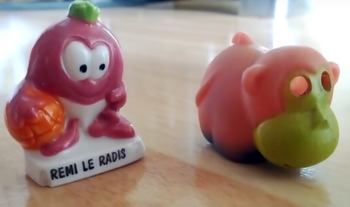 Les Aventures de Rémi le Radis ("The Adventures of Rémi the Radish") is a French webseries created by Noru-Da (nowadays known as Darts) in 2013 for the VoxMakers website. It revolves around the adventures of Rémi, a charm representing a basketball-playing radish, and his companion Esteban, a Spanish-speaking pink plastic toy.

The series is notable for three things. Firstly, it features figures, toys, food, and common household objects as its characters; they're not animated or moving around as they speak, they are merely being dubbed over as they're being filmed, with the occasional movement when someone attacks or gets something thrown at them. Secondly, the episodes are completely out of order, with the first episode labeled as "Episode 47", then the following as "Episode 21", and so on; the proper viewing order is indicated not by the episode numbers, but by the numbers on the video thumbnails. Finally, if you haven't figured it out already, the series is filled to the brim with Surreal Humor.

A sub-series, Rémi le Radis VS Le Monde ("Rémi the Radish VS the World"), has Rémi and Esteban discuss, parody, or encounter the characters of various franchises. Three episodes have been released : "Rémi VS Star Wars", "Rémi VS The Legend of Zelda", and "Rémi VS Ace Attorney". Those were supposed to pave the way for a second season of the series, but those plans were cancelled when Noru-Da decided to quit making videos.

There are also several bonus episodes available, including a mini-series titled Rémi le Radis Lite focusing on side-characters, a trailer for a non-existent movie, a fake ending labeled as "Episode 486", a side-episode showing Fish Rider's side of the series' events, and a few bloopers.

The entire series is available in order in this playlist

, whereas the VS Le Monde spin-off is available in this one