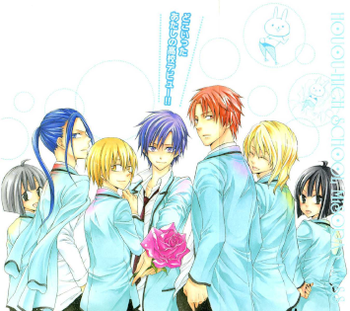 Kei is a lesbian who can't seem to find a girl to be in a serious relationship. Her mom disapproves of her sexuality, so she sends her to an all-boys school in hopes that she'll get married to a boy eventually.

Houou Gakuen Misoragumi is a manga created by Aki Arata, which ran in the shoujo magazine Comic Avarus from 2008 to 2010. The manga was licensed by Digital Manga Publishing under the name The Beautiful Skies of Houou High. The print release appears to have been dropped after the 1st volume, due to the sheer amount of Values Dissonance. However, the full series was released for Kindle.

Compare to Maria†Holic, which has a similar premise but is even more comedic and lacks romance.