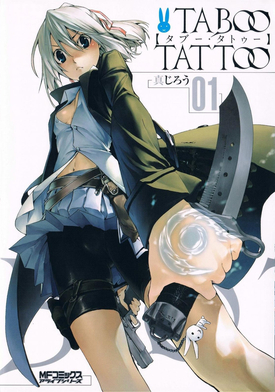 Taboo-Tattoo is a Fighting Series by Shinjirou about a boy who is given an odd tattoo on his palm by an old man whom he saves from a thug. Not long after this boy, Seigi (AKA Justice) got it, he meets a mysterious girl, who punches him in the face, and later steals his phone. Running after her gets him more than he bargained for, though, and he ends up drawn into the beginning of what might be the start of international war...

It received an anime adaptation by JC Staff which aired as part of the Summer 2016 Anime lineup, and ran for 12 episodes.