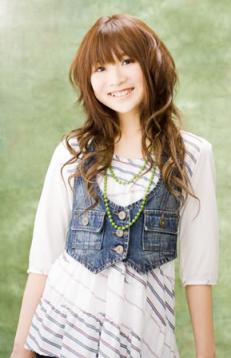 May Nakabayashi (born October 21, 1989), better known by her stage name, May'n, is a young, amazingly talented Real Life Idol Singer from Japan. She participated in the 28th "Horipro - Talent Scout Caravan - Love Music - Audition", where she survived the final elimination round to become one of the top 4 out of 34,911 hopeful singers. At Age 13. Her popularity exploded when she was made the singing voice of Sheryl Nome, performing numerous J-Pop numbers written by Yoko Kanno. Despite a blossoming career, Sheryl Nome still sells more albums than she does, mostly because of YOKO KANNO, though she did help May'n with one of her own songs.

In person, she is rumored to be very Moe, and she once sang a duet of Totsugeki Love Heart with NEKKI BASA-err, Yoshiki Fukuyama, an event which nearly destroyed the world with awesome (And you, too, can be witness to The Power of Rock thanks to YouTube

!). Aside from her work as Sheryl Nome, she's also well-known for her work on the theme song to Shangri-La and a few other anime courtesy of May'n.

Has a movie coming out that is basically: MAY'N: THE MOVIE - IN 3D. The trailer consists solely of May'n sitting in a plain white room with speech notes and a blatantly plain outfit telling the audience about the movie. [1]

It is apparently a documentary and live concert, in 3D, of course.

Not the biggest body of work, but Sheryl Nome is her own body of work. She also has a few solo albums as May'n, and a cluster of singles. Since becoming Sheryl Nome, she seems to release one Sheryl Nome cover per album, the first being a pretty straightforward version of Lion, where she sings both Sheryl's and Ranka's parts, and the second a much different version of Welcome To My FanClub's Night (May'n On Stage!). She also apparently has an acoustic version of Diamond Crevasse bouncing around (a song which Sheryl Nome herself has three versions of. It itself is really second only to Do You Remember Love? and has made a compelling case for becoming a franchise staple song like Do You Remember Love? and My Boyfriend Is A Pilot). Doubt of her singing abilities will be met with extreme musical prejudice