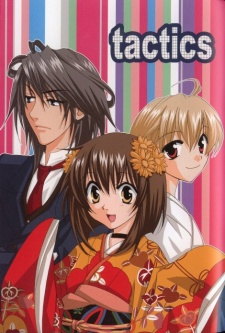 A Deadpan Snarker, a Tsundere Meido, and a Bunny-Ears Lawyer. Hence: your doom.
Advertisement:

A shounen manga and anime series by Sakura Kinoshita and Kazuko Higashiyama, which was serialized from 2000-2013 in 15 volumes, and resumed serialization as a sort of sequel on Pixiv as tactics 新説 without a larger associated publisher in 2018. It follows a spiritually sensitive folklorist, his enthralled servant fox Youko, a bratty little girl, a demon eating tengu named 'Haruka', and their various escapades all throughout demon country, until the major Genre Shift in the anime kicks in and everything gets a whole lot more depressing.

The anime, produced by Studio DEEN and airing from 2004 to 2005 for 24 episodes, made a major departure from the plot of manga roughly halfway through, which was not apparent to many English readers because the English license through Tokyo Pop only translated the first 8 volumes.

Not to be confused with Final Fantasy Tactics, Tactics Ogre, or other strategy games.