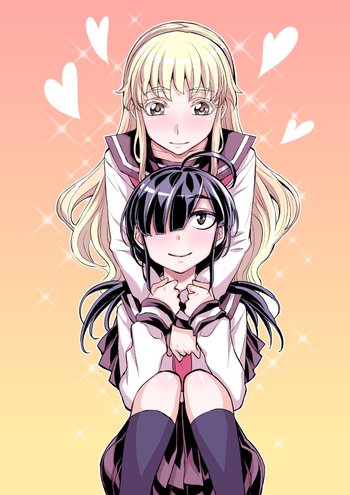 Kageko Tadokoro is a second-year High School student. Shy and withdrawn, she spends her free time drawing manga away from the eyes of her classmates, who deem her to be gloomy and often make her the butt of the class' jokes. Enter Sakurako Nikaidou, the beautiful School Idol who is adored by everyone. Little to anyone's realization, she's been wanting to get to know the shy Tadokoro for some time, but never knew how to approach.

That is until, she gets a look at Tadokoro's artistry. More importantly, a sketch of her in Tadokoro's sketchbook.

Sakurako, now even more determined to get closer to the girl she's never had a chance to interact with, pursues her infatuation with great abandon.

Tadokoro-san is a Yuri webcomic created by Manga artist Tatsubon in 2018 with an official English translation available on LILYKA. Soon after, the manga, which has some Adaptation Expansion began its serialization in 2019 under Comic Valkyrie.

Note: Tropes pertain to both Manga & Webcomic versions of the series.