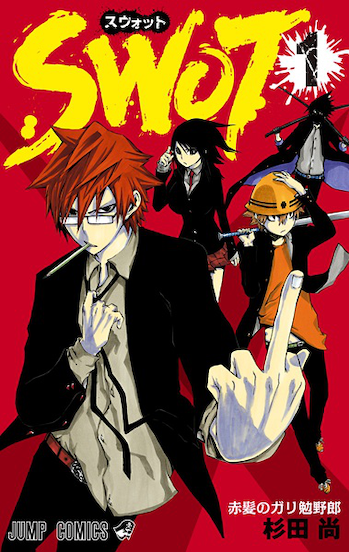 SWOT is a short-lived manga by Naoya Sugita, which was serialized in Weekly Shonen Jump from July to November 2010 and compiled into three volumes.
Advertisement:

Transfer student Manabizaki Kyou is a swot, a person who spends too much time studying. His dream is to attend Tokyo University and then build a UFO! He will soon discover, however, that the high school he's transferred into, which was once very prestigious, has taken in delinquents from the surrounding schools. Now it is full of violence and gang fights.

Luckily, Manabizaki has a surprising skill at fighting, particularly when he's defending the peace of his study area. Through this strength he'll find his new friends, a weak boy called Iwashida Touji and a legendary delinquent girl, Hasuno Nene, who makes him feel things that, for the first time in his life, he can't explain...