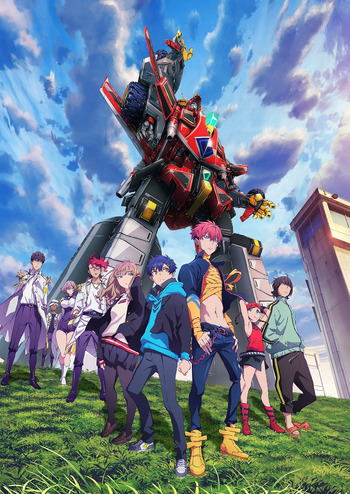 SSSS.DYNɅZENON note simply pronounced as "Dynazenon" is a 2021 Japanese anime television series and the sequel to the 2018 anime SSSS.GRIDMAN. The project is part of the shared "Gridman Universe" multimedia project established in 2018, which features projects themed after/inspired by the 1993–94 tokusatsu series Denkou Choujin Gridman/Gridman the Hyper Agent. The series is produced by Studio TRIGGER and Tsuburaya Productions. DYNɅZENON premiered in Japan on April 2, 2021, with an English-subtitled simulcast from Funimation. Graphinica returns to provide CGI and compositing, along with serving as an additional co-producer on the series.

Yomogi Asanaka, an ordinary high schooler, encounters a strange man named Gauma, who claims to be a "Kaiju User". When the city is attacked by a rampaging kaiju that Gauma seemingly can't control, he summons the giant robot Dynazenon to battle it. Yomogi, his classmate Yume Minami, local NEET Koyomi Yamanaka, and Yamanaka's cousin Chise Asukagawa all end up being drawn into the fight alongside Gauma, inadvertently becoming his co-pilots. Together, they must uncover the mysteries surrounding both the Kaiju attacks and Dynazenon itself, all while the mysterious group known as the Kaiju Eugenicists begins to make its move...

, a theatrical movie serving as the third entry in the Gridman Universe.