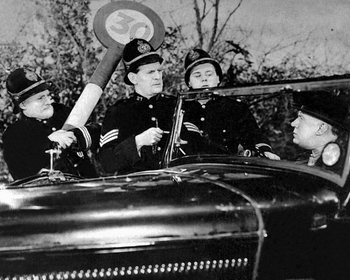 Ask a Policeman is a 1939 British comedy film directed by Marcel Varnel and starring Will Hay, Moore Marriott and Graham Moffatt.

Turnbottom Round prides itself as the village without crime; there has not been an arrest recorded by the local police for years. Unfortunately, this is more to do with the inability of Sgt Dudfoot and his constables Albert Brown and Jerry Harbottle to so much as recognise a crime. With their jobs on the line, the trio attempt to stage a crime of their own, only to inadvertently uncover a smuggling ring and a headless horseman...

It was later remade as The Boys In Blue.