Manga / Uzaki-chan Wants to Hang Out! 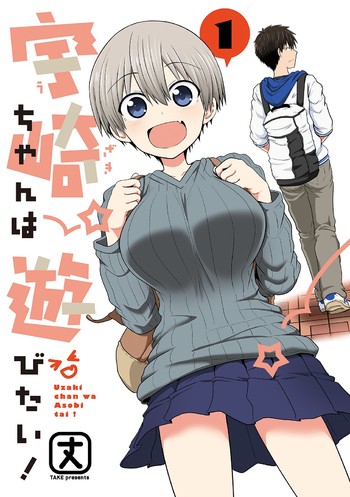 Uzaki-chan Wants to Hang Out! (宇崎ちゃんは遊びたい!, Uzaki-chan wa Asobitai! or Uzaki-chan Wants to Play!) is a Slice of Life / ecchi comedy manga series by Take. The manga has been serialized by Kadokawa Shoten in the magazine Dra-Dra-Dragon Age since December 2017, and is licensed in the United States and Canada by Seven Seas Entertainment.

Shinichi Sakurai is a fit and grumpy-faced 3rd year college student who just wants to spend his free time alone. Unfortunately for him, an underclassman from his high school days, the short, energetic, and very buxom 2nd year student Hana Uzaki, has taken notice of this. None too pleased that someone she once admired has a nonexistent social life, she resolves to remedy that: by constantly pestering and teasing him until Sakurai is forced to hang out with her on a regular basis. Slowly, but surely, he gradually starts enjoying his time with her to the point that, even with all their bickering, they've become best friends who are almost always seen together. And maybe with a bit more time, they'll become something a bit more...

The cast is rounded out by Sakurai's coworker Ami Asai, a slightly perverted woman and Shipper on Deck who works with him (and later Uzaki) at her father Akihiko's cafe; Itsuhito Sakaki, Sakurai's womanizing classmate and Only Friend prior to Uzaki streamrolling into his life; and Uzaki's much meeker but equally buxom mother, Tsuki, who is under the mistaken impression that Sakurai is some kind of scary pervert when he really just wants to pet some cats.

. A second season was announced shortly after the finale, planned for a 2021 release. The series was licensed by Funimation and can be watched here

Uzaki-chan Wants to Hang Out! provides examples of:

Sakurai plays along with Uzaki's attempt to hypnotize him until she tries taking it too far.

Example of:
Pretend to Be Brainwashed

The Dangers of VR

Sakurai plays along with Uzaki's attempt to hypnotize him until she tries taking it too far.

The Dangers of VR