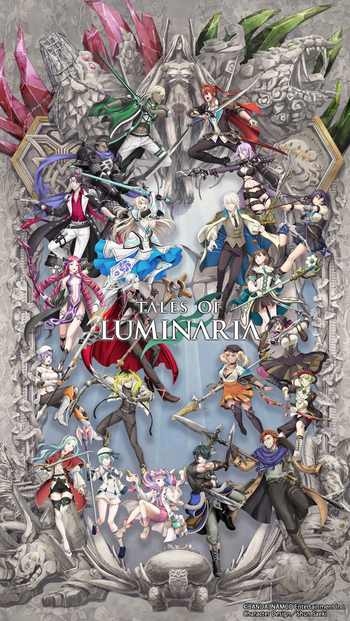 Tales of Luminaria is a mobile title in Tales Series after Tales of Crestoria. It was announced during Gamescom 2021's opening night, on August 25, 2021, with a scenario mainly penned by Sekina Aoi (Student Council's Discretion, Gamers! (2015)) and character designs by Shun Saeki (Food Wars!). The title was trademarked in Japan on October 14, 2020. The game itself was released on November 3, 2021.

In the distant past, the world was home to massive Primordial Beasts who freely roamed the land. Now in the present day, their petrified remains radiate a magical energy known as mana, leading to the creation of many human cities and nations who take advantage of this powerful resource.

In comparison to other Tales mobile titles, Tales of Luminaria features a fully-original cast with twenty-one main characters, and the goal of having none of them as the "main protagonist". The original plan was for each character to have eight episodes depicting their story, with a new episode released every week and often in Anachronic Order. There were also occasional "Crossroads" episodes which depicted important events involving many of the characters at once. It had a simultaneous release in Japan and overseas, like Tales of Crestoria, and was also the first mobile title in the series to have English voice acting as opposed to other mobile titles having only Japanese voice-overs when brought overseas.

A short anime adaptation (in the form of 2 half hour episodes), titled Tales of Luminaria the Fateful Crossroad, by Kamikaze Douga aired on January 20, 2022. Funimation streamed it, including a dub.

, a mere nine months after it began. This left most of the story unfinished, and there are currently no plans to finish the story in another medium. The final update released every upcoming costume and weapon that had been finished before the closure was announced, and a special "Episode Final" that revealed one of the most important mysteries: the exact series of events which led Hugo to defect from the Federation to the Empire.

Tropes associated with this game so far: