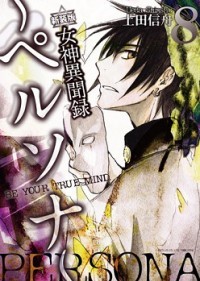 Megami Ibunroku Persona is the manga adaptation of Persona by Shinshū Ueda. Released only in Japan, the manga started serialization in 1996 and was completed in 2000, with 8 volumes and the total of 44 chapters.

This manga is by far the most popular and well-known adaptation of the original game, partially because the other various adaptations are not available in English.

The manga covers both the SEBEC route and the Snow Queen Quest. It also contains many elements that were not present in the game, such as the backstory of the protagonist, who is no longer a Heroic Mime but instead is named Naoya Todou and has his own backstory and personality.