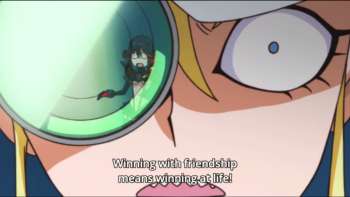 The standard reaction to hearing Mako Mankanshoku's speeches for the first time.
As a Moments subpage, all spoilers are unmarked as per policy. You Have Been Warned.Due to the surreal, merciless, and silly nature of the show and the people who put in production on said show, Kill la Kill has only a single word to describe most of its moments: HA!Episode 1
Advertisement: