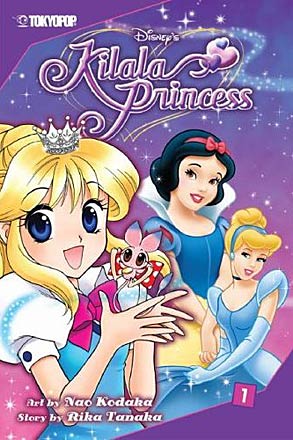 Gee, who could the 7th Princess possibly be?
Advertisement:

Kilala Princess is a shōjo manga licensed by Disney and serialized by Tokyo Pop, written by Rika Tanaka. Originally the volumes were released as half-volumes, never making it past the Japanese Volume 2 in English. However, in 2016 and 2017 Tokyopop released all five volumes in proper format.

The basic plot is like a shoujo version of Kingdom Hearts. A young girl, Kilala, has always dreamed of being like the Disney Princesses. When she meets Prince Rei, who's looking for the Seventh Princess to save his kingdom, Kilala resolves to help him.

To do this, she travels to the lands of the Disney Princesses and works to save their lands from evil, collecting the magical gems that will save Paradiso in the process. But the Disney villains aren't the only ones Kilala has to watch out for...

began release in 2020, focusing on Mulan, Pocahontas, and Brave's Merida as the tiara sends Kilala on a new quest. This series, unlike the first, is written by Mallory Reaves.