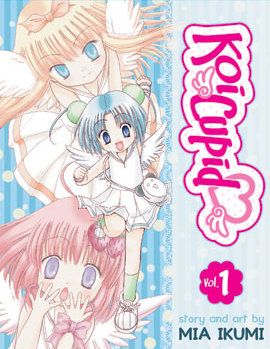 Koi Cupid is a manga written and illustrated by Mia Ikumi. The story revolves around three young cupids, Ai, Ren, and Koi.

Training to become full-fledged angels, they go on special missions to bring people together using The Power of Love. However, it isn't as easy as one would think; sometimes the humans are uncooperative or disbelieving. And then there are the demons…

According to The Other Wiki, it's a seinen manga.