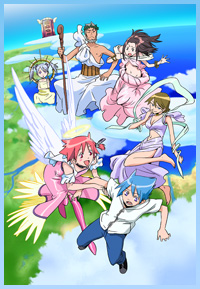 Samatarou may appear to be just an average high-school boy, but that is far from the truth. He is really the son of God, his mother is a goddess and his sisters are candidates to become goddesses. They currently live in the human world because they want their boy to learn about human customs and the habits of the creatures that they protect in order for Samatarou to become a better god. Tenko is an angel assigned to look after Samatarou who was born the same day as him and has been a close friend ever since. Life seems normal, but things start to change with the appearance of a transfer student named Kumiko. Samatarou falls in love with her and from then on things start to become very different. His decision to make her fall in love with him without using his powers is just the start of his troubles.

Kamisama Kazoku is a harem anime series that premiered on May 18, 2006, and was based on a series of light novels by Yoshikazu Kuwashima. The original light novel series has been concluded with 8 volumes, but on January 25, 2008, a sequel series titled Kamisama Kazoku Z was released. The opening