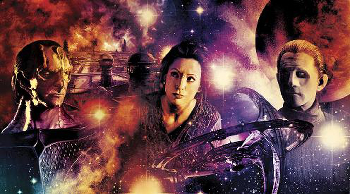 Terok Nor is a trilogy of novels and a part of the so-called Star Trek Novel Verse. It details the backstory to Star Trek: Deep Space Nine, including the Cardassian annexation of Bajor and the early lives of several major characters (chief among them Dukat, Odo, Kira Nerys and Ro Laren). It also features a number of established supporting characters, filling in their lives and backstories as well. Advertised as part of Star Trek: The Lost Era, it also contains many a Continuity Nod to the Star Trek: Deep Space Nine Relaunch books.
Advertisement:

The three novels are Day of the Vipers, Night of the Wolves and Dawn of the Eagles. The first book was written by James Swallow, the other two by S.D. Perry and Britta Dennison.