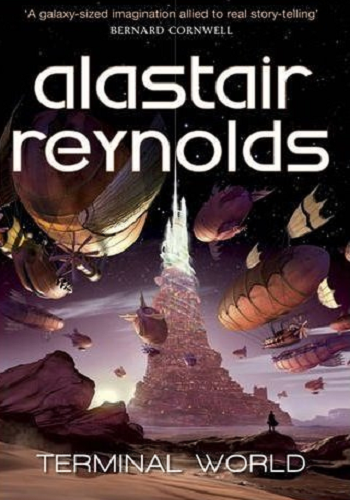 Terminal World is a sci-fi novel by author Alastair Reynolds. It's a stand-alone story, distinct from his usual Revelation Space universe. Taking place thousands of years into a bleak future, the novel concerns the last remaining city of mankind, the strange reality warps around it that limit the level of technology people can build, and a doctor's exile from that city into the wastelands outside.
Advertisement:

The story begins on Spearpoint, a gigantic tower made of some long-forgotten indestructible material. On a long spiraling path winding up its sides is a city that has persisted for thousands of years. Out of the heart of Spearpoint emanates the "zones"; areas where the fundamental laws of reality seem to vary, limiting the kinds of technology that are able to exist within each zone. As such, Spearpoint is divided into distinct neighborhoods, depending on the main technology that is used within them. At the bottom is "Horsetown", where only the most basic, dirt-simple tools can function. Further up is "Steamtown", where steam-based technology is possible, and "Neon City", where the technological level is on par with The '50s. Further up still are more progressively advanced zones, culminating at the very top of Spearpoint with the "Celestial Heights", where posthuman Angels, their bodies thrumming with nanotech, fly through the sky.

The story follows a pathologist named Quillon, who works in a morgue in the Neon Heights. He's known as a bit of an eccentric, requesting the odd Angel corpse that has fallen from the higher levels to Neon Heights. Little do his colleagues know, he has a dark secret: Quillon himself is an Angel in disguise, sent to infiltrate the Neon Heights as part of an experiment to test the limits of Angel bio-engineering. Normally Angels will die if they leave their zone, since the nanotech in their bodies stops working, but Quillon and his original team had been altered to survive in the lower zones. However, the mission went awry, ending up with Quillon having to kill two of his partners. Now he spends his time trying not to draw attention to himself, hoping to stay relatively hidden in the lower tech zone; no one suspects his true nature, and he intends to keep it that way.

Then one day another Angel falls to the Neon Heights. Mistaken for dead, it's taken to Quillon whereupon the "dead" angel wakes up and delivers a warning: get out of Spearpoint while you still can.

Now on the run, Quillon enlists the help of a guide named Meroka in order to leave Spearpoint and flee into the wastelands beyond. Beyond Spearpoint, where the zones extend into vast geographical areas and roving bands of savages known as "Skullboys" roam the land, raping and pillaging anyone they can find. Out there, Quillon and Meroka discover a woman with an astonishing ability: she's a "tectomancer", one who has the ability to shift the zones.

After a devastating "zone storm" that nearly destroys Spearpoint and alters the landscape of reality, threatening society with collapse, Quillon and Meroka must seek out the assistance of the Swarm, a zeppelin-based former military branch of Spearpoint. With Swarm's assistance, they hope to return to Spearpoint with the tectomancer and restore the balance of the zones.