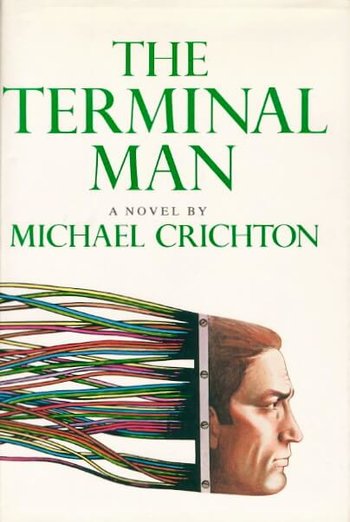 The Terminal Man is a 1972 science fiction novel written by Michael Crichton.
Advertisement:

Harry Benson, a man at least 30 years old, suffers from psychomotor epilepsy. He often has seizures followed by blackouts, and then wakes up hours later with no knowledge of what he has done. During one of his seizures he severely beats two people. He is a prime candidate for an operation to implant electrodes and microcomputer in his brain to control the seizures. Surgeons John Ellis and Robert Morris are to perform the surgery, which is unprecedented for the time. In modern medicine, such a device would be called a brain pacemaker. Even though Harry is psychotic (he adamantly believes that there is no difference between man and machine) and it wouldn't necessarily stop the crimes he commits during blackouts, the doctors go through with the procedure anyway. Unfortunately, it turns out that they programmed the electrodes incorrectly, because Harry likes the shocks the electrodes give him, and he deliberately tries himself into seizures just to get the buzz. That, and he escapes without even getting any thorazine. Now, they must catch him before someone really gets hurt.

Got a 1974 film adaptation of the same name, directed by Mike Hodges and starring George Segal as Harry.

Not related to the 2004 Tom Hanks film The Terminal based on the autobiography The Terminal Man by Mehran Karimi Nasseri about his eighteen year stay in the departure lounge of an airport.