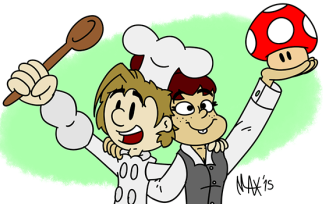 Order Up! note From left: Nolan and Gretha

(technically the full title is Bits and Bytes Restaurant) is a video game themed webcomic by Argentina-based artist Maximiliano Baldo a.k.a megawackymax

It follows Nolan Nett, a chef freshly graduated out of school who opens his own restaurant called Bits & Bytes. Initially as with any opening venture he finds difficulty at first as he barely got any customers. But business picked up from the most unexpected of clients: video game characters! What follows is his trials and tribulation in running an eatery with all manner of weird customers to which he's soon joined by Cooking Mama and Zess T serving as fellow chefs and later a waiteress named Gretha Sharp whom he's taken a fancy to.

Originally part of a gaming newsletter, it was converted into a webcomic after the newsletter was shut down with the comic now translated for all to enjoy. Updated on the Tumblr site as well as seen on megawacky's DA page.

Bits and Bytes has the following tropes: