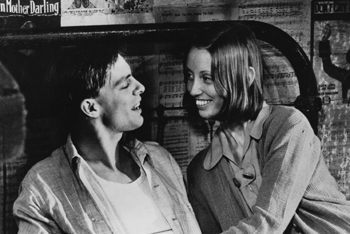 A 1974 crime drama directed by Robert Altman, based on the 1937 novel by Edward Anderson (which had previously been adapted in 1948 as They Live by Night, directed by Nicholas Ray).

Arthur "Bowie" Bowers (Keith Carradine) escapes from a Mississippi prison along with two older convicts: Elmo "Chicamaw" Mobley (John Schuck) and Thomas "T-Dub" Masefield (Bert Remsen). The trio commits a string of bank robberies, hoping to pull together enough money to live comfortably while they hide from the law. Between this activity they split their time staying with T-Dub's sister-in-law Mattie (Louise Fletcher) and Elmo's brother Dee Mobley (Tom Skerritt). Bowie becomes acquainted with Dee's daughter Keechie (Shelley Duvall), and they fall in love. But the trio's time spent on the lam is starting cause a strain on everyone involved. Bowie struggles to remain loyal to his partners and to his lover, who wants him to turn away from a life of crime. But fate has unexpected twists and betrayals waiting for them.

Altman, writer Joan Tewkesbury, and several members of the cast would later work together on Nashville.

No relation to the Stephen Cole novel.