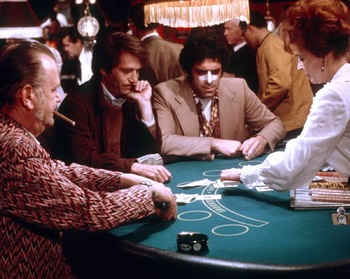 "...being the story of two bet-on-anything guys who happily discover something called a winning streak."

The tagline isn't quite accurate, but this 1974 Robert Altman comedy is nonetheless full of gambling, gambling, and more gambling.

Charlie Waters (Elliott Gould) and Bill Denny (George Segal) meet at a poker game in Los Angeles, and quickly become best friends. Together they ride the highs and (mostly) lows of cards, ponies and general hustling, ending up in Reno, Nevada, where they wander from game to game in a casino.

With a witty script and excellent acting from the two leads, the film became a Sleeper Hit in 1974. It's also remembered for the innovative approach to sound mixing that Altman employed, with multiple wireless microphones fed into a mixer, a technique he would further refine on his next project, Nashville.