Film / They Shoot Horses, Don't They? 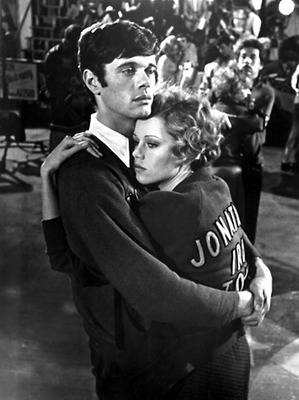 A 1969 film based on the Horace McCoy novel of the same name and directed by Sydney Pollack, They Shoot Horses, Don't They? focuses on the participants in a grueling California dance marathon in 1932, in the depths of The Great Depression.

Robert Syverton (Michael Sarrazin), an unemployed young man and aspiring film director, wanders into the shabby La Monica Ballroom on the Santa Monica Pier just as contestants are getting signed up for a dance marathon with a cash prize of $1,500. When the partner of cynical would-be actress Gloria Beatty (Jane Fonda) is disqualified for having a cough that could be a sign of tuberculosis, Rocky (Gig Young), the fast-talking MC of the marathon, recruits Robert to be her new partner. Among the other contestants are middle-aged retired sailor Harry Kline (Red Buttons), aspiring actress Alice (Susannah York) and her partner Joel (Robert Fields), and farm worker James (Bruce Dern) and his heavily pregnant wife Ruby (Bonnie Bedelia).

The rules are simple: they dance round the clock with ten minute breaks every two hours (contestants have to learn to "sleep" standing up), and the last couple standing wins the cash prize. The marathon drags on for days, then weeks, and the contestants' tempers quickly fray. Gloria and Robert attract the attention of local widow Mrs. Laydon (Madge Kennedy), who persuades a local iron-tonic company to sponsor the couple in exchange for wearing sweatshirts advertising their business. However, Gloria becomes jealous of the attention Robert is giving Alice, and exchanges partners with her. This proves short-lived, as Joel receives a job offer and abandons Gloria, who pairs off with Harry.

Rocky keenly exploits the dancers' various vulnerabilities for audience amusement, and periodically organises hellish "derbies" in which the contestants must complete several circuits of the ballroom, with the last three couples automatically eliminated from the overall marathon. During one such derby, Harry suffers a fatal heart attack and is dragged across the finish line by Gloria; his dead body falls into Alice's arms, causing her to suffer a nervous breakdown and withdraw from the competition, re-uniting Robert and Gloria as dancing partners. Rocky tries to persuade the two of them to get married on the dance floor, but after Gloria refuses and states her determination to win the marathon, the MC makes a devastating revelation.

The film was a hit with critics and audiences, though it holds the dubious distinction of receiving the highest number of Academy Award nominations without being nominated for Best Picture, with nine (it won just one: Best Supporting Actor for Gig Young as Rocky). The film's title is perhaps more widely known than the film itself, with many works named by variants of "They Shoot ____, Don't They?", whether or not the plot bears any resemblance to that of the film.