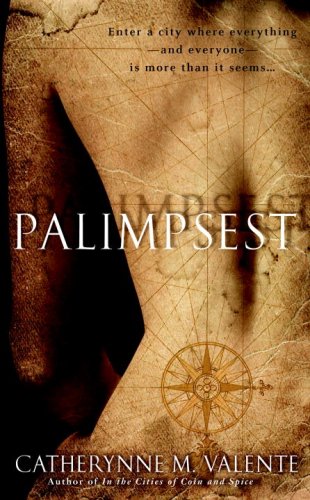 Deep in the recesses of dreams, or so it seems, there lies the city of Palimpsest. It is a city of great terror and wonder, impossible beauty and unimaginable cruelty, known simply as home to its inhabitants. But for the immigrants, the people who come to the city only at night, it is a place so strange that they, outcasts in the real world, find that they finally belong.

But they cannot stay more than a night at a time. They come to the city in fours, in Quartos, folded together in spirit by an old fortune-teller so that they each feel what the other three feel when they are in the city. There are rumors that immigrants can come to the city permanently, except none of them know how, and none of the locals wish to tell them.

The novel follows one Quarto: Amaya Sei, a blue-haired, train-obsessed woman from Tokyo; November Aguilar, a Californian beekeeper who orders the world into myriad lists; Oleg Sadakov, a locksmith from New York City who hears the secret yearnings of locks and keys; and Ludovico Conti, a book binder from Rome who hears his books come to life. This is their journey to immigrate to Palimpsest.

Though whether that is a wise choice or not is left up to the reader.