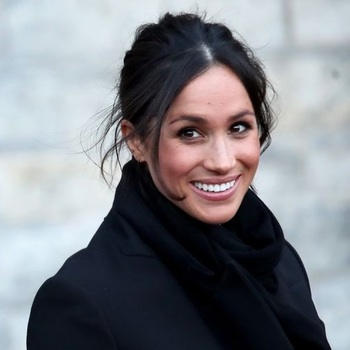 What's the secret to her healthy hair?
Advertisement:

Meghan, Duchess of Sussex (born Rachel Meghan Markle; 4 August 1981 in Los Angeles, California) is a member of The British Royal Family. Formerly an American actress best known for her role as Rachel Zane on Suits, she married Prince Harry, Duke of Sussex, on 19 May 2018. She is from California and the first American to become a member of The British Royal Family, as well as the first bi-racial member and one of the first non-titled members to marry someone in the direct line of succession.

From a young age she has experienced showbiz, but not as part of it: she was raised in Hollywood, and at age 11 successfully campaigned to have what she viewed as a sexist television commercial cut from syndication. She hasn't slowed down since, taking on charity work in human rights-related causes all throughout her career and making it clear that she'll be using her new title to do even more for those causes.

In January 2020, she and her husband issued a statement saying they would be "stepping back" from being senior royals and living in North America part-time, but expressing a wish to represent the Queen part-time while earning money and doing work privately; the public announcement caught the Palace by surprise. After several days, it was announced that they would no longer be working members of the Royal Family or use their "Royal Highness" prefixes for any commercial purpose, while continuing with a handful of their personal patronages. In March 2021 it was announced that they would not be returning to royal duties.

Meghan and Harry have resided since 2020 in Montecito, California.