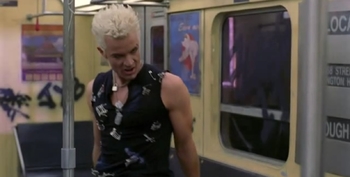 "Come on. I can feel it, Slayer. You know you want to dance."
"Every day you wake up, it's the same bloody question that haunts you: is today the day I die? Death is on your heels, baby, and sooner or later it's gonna catch you. And part of you wants it... not only to stop the fear and uncertainty, but because you're just a little bit in love with it. Death is your art. You make it with your hands, day after day. That final gasp. That look of peace. Part of you is desperate to know: What's it like? Where does it lead you? And now you see, that's the secret. Not the punch you didn't throw or the kicks you didn't land. Every Slayer has a death wish. Even you."
—Spike
Advertisement:

In a routine patrol, Buffy fights with a vampire. Buffy has the upper hand, but at the last second, the vamp twists Buffy's arms, stabbing her stake into her own stomach. She attempts to flee but is cornered by the vamp, wielding the stake and preparing to finish her off. Riley appears at that moment and fights him off before going to tend to Buffy.

The next morning, Riley patches up Buffy's stab wound; the embarrassing circumstance of nearly being killed by a lesser vampire with her own stake isn't lost on her and leads to Buffy's fear that she's losing her edge, despite Riley's reassurances. While Riley suggests she go to the hospital, Buffy feels it would only upset Joyce and her enhanced healing abilities will kick in soon enough. Dawn comes in to tell them that Joyce is coming up, prompting Riley and Buffy to hide the medical supplies they'd just been using. Joyce notices the bottle of rubbing alcohol on the dresser and asks if they've been disinfecting something. Dawn covers and says it's hers. Buffy asks Riley to take the rest of the gang patrolling in the cemetery tonight.

Meanwhile, Buffy is still rattled after her close encounter the night before. She does some research with Giles to find out how previous Slayers died and what it was that made their last fight special. They are unable to find any useful information, mostly because past Watchers either found the subject too painful or were killed along with their Slayers. Giles notes that unfortunately, there's no one left to tell the tale of a Slayer's last battle. Buffy realises there is someone who can help and confronts Spike in his crypt, demanding to know how he killed two Slayers.

Later at the Bronze, Buffy lays down some ground rules: if Spike tells her what she wants to know, he'll get a wad of money. Though initially reluctant to tell her anything of use, Spike barters for a plate of buffalo wings as he refuses to talk on an empty stomach. In doing so, Buffy accidentally reveals her stab wound, causing Spike to annoy her further. Buffy asks him if he's always been annoying and he replies that he's always been bad.

London, 1880 – Spike is shown to be a quiet and shy gentleman named William who feels disconnected from society. While at a society ball, William works on a love poem, but his unfinished work is snatched out of his hands and read aloud, much to the amusement of the crowd. William is dubbed 'William the Bloody' because of his 'bloody awful poetry'. One party-goer declares he'd rather drive railroad spikes through his head than listen to any more of the poetry. The poem reveals William's love and admiration for a woman named Cecily, whom he's loved from afar. She doesn't care for him, and when she learns of his feelings, she rejects him and tells him he's 'beneath' her. William is devastated and leaves the house in tears, bumping into a group of strangers in the street. In a hay barn, he starts ripping up his poems when Drusilla appears before him. She asks what has brought him to tears and comforts him by telling him that she sees his greatness and worth. She promises a better future by her side and sires him without much persuasion.

Back in the present, Riley and the gang find several vampires loudly and drunkenly partying in a crypt, including the one who stabbed Buffy. They decide to return in the morning when the nest is asleep rather than take them on at night. Spike plays pool while continuing to tell his story to Buffy. After his siring, William was a completely different being. Tired of being left out by the world, he became empowered and destructive.

Yorkshire, 1880 – Angelus is throttling William at the bottom of a coal mine, wondering why he hasn't killed him yet. William, now having adopted his accent and swagger, tells him he goes by the name of 'Spike' now. Spike's strong tendency to incite mass riots simply for the joy of causing trouble is now impacting his vampire family. His most recent hijinks resulted in them having to hide in the abandoned mine shaft, which angers Angelus. Spike feels Angelus only goes into fights he knows he'll win. Spike then insults Angelus's methods, which annoys him so much, he nearly stakes him. The elder vampire says that if he doesn't see the error in his ways, something will finish him; either a mob or a Slayer. Spike is suddenly interested, asking, "What's a Slayer?"

Spike explains to Buffy that thereafter, he became obsessed with finding and defeating a Slayer of that era. He notes that his first lesson was that a Slayer will always need to reach for her weapon, whereas he has all the weapons he'd need in his fists and fangs. To illustrate the point further, Spike tells her about the first Slayer he killed.

China, Boxer Rebellion, 1900 – Spike fights the Chinese Slayer in a building while the rebellion rages outside. They appear evenly matched, but Spike is able to knock the Slayer's weapons out of her hands, and after keeping her from reaching the stake she'd dropped whilst fighting, Spike kills her. While Spike and Drusilla revel in the kill and the taste of the Slayer's blood, Angelus appears distracted and suggests they leave soon. Spike says it was the best night of his life.

Buffy is disgusted that he got off on the kill, but Spike rightly counters that Buffy has done the same in the past. He further points out that she could kill tens of thousands of vampires and demons during her life, but all it takes to kill her is for one of them to get lucky. Meanwhile, Riley returns to the vampire nest at the crypt despite agreeing to come back in the morning. After staking the vamp that hurt Buffy, Riley blows up the nest with a grenade.

New York, 1977 – Spike tells Buffy how he killed his second Slayer, Nikki Wood. Spike and Buffy fight out a play-by-play of the battle, which took place on a subway train. Spike notes that this Slayer wasn't all business like the first one—she had a more improvised style like Buffy. After he snapped the Slayer's neck, he took her leather jacket for himself. Spike then explains that the key to his victories was not in the particular moves used but the Slayer's death wish, a desire to experience death after causing so much of it. They want to know what it's like to experience peace after having to protect people for so long. Spike remarks that Buffy has it too but has 'ties to the world'—her family and friends—but ultimately, those connections won't keep the desire at bay forever. Spike concludes that the second that desire takes over, the Slayer will die, and that the countless vampires just wait to take advantage of it. Buffy rejects the idea.

Spike and Buffy are almost standing nose to nose and Buffy is suddenly confused when Spike appears to come on to her, trying to kiss her before grabbing her arms and saying that she wants to dance. In response, Buffy pushes Spike to the ground. She echoes what Cecily said to him all those years ago, telling him that he's beneath her before throwing the money at him and walking away.

Crying softly, Spike picks up the crumpled notes on the floor. His sadness quickly turns to rage and he returns to his crypt, taking a shotgun and planning to kill Buffy for that final insult. Harmony begs him not to as he's tried so many times before and failed. She reminds him that the chip in his head won't let him hurt a human and the Slayer will either beat him up or stake him outright. Spike retorts that the pain will last a few hours whereas the Slayer's will last much longer.

South America, 1998 – Drusilla turns away from Spike's devoted love, as she can't look at him the same way after he teamed up with Buffy to deal with Angelus. In the background is a Chaos Demon whom Drusilla had been shamelessly flirting with. She recognises long before Spike does how he feels for Buffy, and now Drusilla doesn't see him as the same creature she had loved for so long. He insists that he did it all for her, to protect her, but she tells him she can't see it anymore.

Buffy returns home, shaken by the combined events of the past 24 hours. She finds Joyce packing a suitcase. After asking her mother where she's going, Joyce explains that her health has worsened and that she needs to stay in the hospital overnight for further tests. This final revelation is too much for Buffy, who retreats to the porch in tears. At that moment, Spike arrives with the shotgun. However, he slows his pace when he sees Buffy crying. His demeanour softens and he lowers the gun, his plans to shoot her abandoned. He asks her if she's okay and if there's anything he can do. She's surprised and confused by his question and has no response. Spike puts the gun down and sits next to her. Surprised by his own reaction, Spike gently puts his hand on Buffy's back to comfort her. Buffy does nothing to stop him.