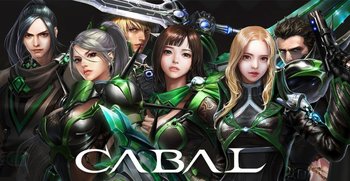 CABAL Online is a 3D post-apocalyptic technopunk action MMORPG developed by ESTsoft. The game first released in 2005 in its home country and the beta version for Europe released in 2006, with subsequent servers gradually released in America and South-East Asia after a few years.

Set in the world of Nevareth, a place devastated by an evil entity group known as CABAL in an attempt to turn the world into a utopia gone wrong. Seven masters who wielded the ancient ability "Force Power" appeared and fought this entity, then teaching the populace this magic to rebuild the world. A thousand years later, CABAL is planning to make a comeback by breeding a child to take up the throne and it's up for the players to rise to combat the imminent threat.

There is a sequel called CABAL Online 2, also made by the same company using the CryEngine3 to improve the graphics. This game changed the technopunk setting into a slightly medieval royal theme and changing the Blader class into the Priest Class. Unfortunately, the game didn't get traction and the servers shut down in 2018.

A Mobile Game exclusive Korea was released in May 2019 and planned for a Global Release, but is delayed for unknown reasons. The mobile game is identical to the PC counterpart, albeit with simplified combat.

Has no relation with Cabal, which was released in 1998.