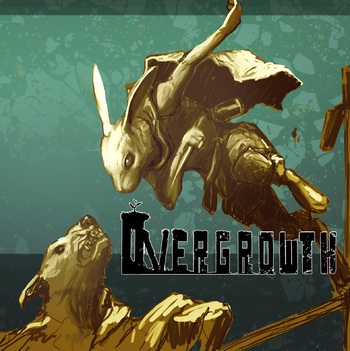 You always have a choice.
Advertisement:

Overgrowth is the long awaited sequel to Lugaru by Wolfire Games

. Overgrowth's story, like its predecessor, takes place on Lugaru island: a place entirely populated by violent anthropomorphic animals. It follows the further adventures of Turner, the vengeful widower turned wandering warrior, a few years after the events of Lugaru.

An Action Game with a heavy emphasis on close quarters combat, Overgrowth also adopts the unique combat system of it's predecessor - unlike most other fighting games, it relies far less on button mashing and much more on timing your moves right: the position and range of the enemy and the direction you're moving all influences what Turner will do with each attack. The result is a remarkably fluid and responsive combat system, as this video demonstrates

. It's also fairly realistic in nature: for example, if you hit your opponent hard enough in the neck or they take a bad fall, it's possible for their neck to break, killing them instantly.

Compared to it's predecessor, the game features vastly improved graphics and physics, a wider range of weapons, and new races (the original's rabbits and wolves plus cats, dogs, and rats.

While the game was in beta testing, it was given a new update (and a new demonstration video)

released roughly every month. It is also now on Steam Early Access, and for awhile was on the top 10 selling list. The game was finally given a 1.0 release in October of 2017.

A webcomic was also released during development which fleshed out certain events and characters who are briefly mentioned in the main story. The comic can be read here