Fanfic / Light and Dark The Adventures of Dark Yagami 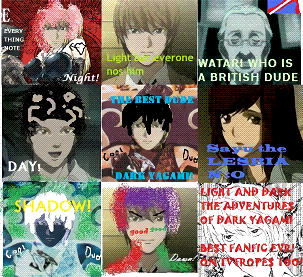 The characters from the series... kind of.
"Some guy told me that im on Tv Tropes now which is like a wikipedia but for tv or something! THIS A FAMOUS STORY BUT I WONT LET IT GOT TO MY HEAD EVEN IF IM AWSEOM! Im not on tv but i guess death note is and thats why they licked it?"
— The author, when he found out about us.
Advertisement:

Light and Dark The Adventures of Dark Yagami

(apparently written completely unpunctuated) is a Death Note fanfic in the same way My Immortal is a Harry Potter fanfic. It's written by D'arkYagam'i

, author of Pain Note The Ressurekshun of Ray Pember! and The God of Time With No Name Lights Real Name!.

It focuses on Dark Yagami, Light's twin brother who trained at Whammy House but is secretly Kira. At first. The story meanders to such an extent that any possible summary would be almost irrelevant by the third chapter, by which point Light's sister Sayu is "sexing" with Misa to steal her Death Note for her dad who has taken Watari's job because Dark told him to but is secretly working for L. Later he goes to prison then comes back and becomes King of the Shinigami before time-travelling to France to kill Near to stop a time paradox. So... yeah.

While it is not renowned on the internet like other troll fics, It can be safely said that this fanfiction is on par with works such as the aforementioned My Immortal, DOOM: Repercussions of Evil, and Half-Life: Full Life Consequences.

Has four completed dramatic readings, by The Holy Cabbage

(no MSTing except in annotations and the occasional snarky remark at the end of a chapter), Mutant Museum

, as well as several unfinished ones, including ReteikiAndYuma

(acted out with action figures), Temascos

(with snarky slideshows), and Pamachu Productions

.Similar to the Death Note fanfiction 'Gofic Love Note'. The anime of which can be found here

The author later wrote a crossover with The Hunger Games, called The Hunger Note Games, where Dark Yagami participates in the titular games.

It has inspired three fan written sequels, Returning of D'ark

, and a PPC mission

On the 25th October 2015, the author returned with a Halloween special named Darker Yagami - Dark Yagami gets Dark

. On the 30th October 2016, he made another Halloween special named Keijo Note Dark Yagami and the Haunted Chest