Fanfic / Lost in the Woods 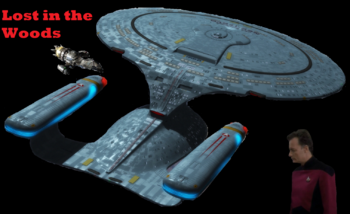 Artwork by Marcus S Lazarus
Lost in the Woods

and its sequel, No Good Deed

, is a crossover between Star Trek: The Next Generation and Firefly, set early in Season Three for TNG and just after Firefly concluded its televised run. When Q returns to the Enterprise, he nonchalantly responds to Picard’s demands that he restore the eighteen crewmembers lost to the Borg during his last visit and then follows it by sending the Enterprise into a parallel universe in the name of his latest test. Woods explores how the two crews interact with each other, culminating in the Enterprise completely destroying the Reaver fleet, and the second explores the consequences of the Enterprise’s visit in both worlds.