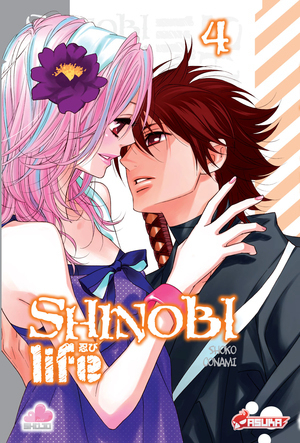 Shinobi Life (シノビライフ Shinobi Raifu?) is a Japanese shōjo romance manga written and illustrated by Shoko Konami. It was serialized in Princess from July 6, 2006 to March 6, 2012. The individual chapters are collected and published in 13 volumes by Akita Shoten.

The manga was licensed for an English language release by Tokyopop, which published the first volume on November 11, 2008. They published seven volumes. It was published fully in French and German. The manga is licensed in Taiwan by Sharp Point Press.

The story is about Kagetora, a ninja and bodyguard of Princess Beni (Red Princess) from the past. He went to the future when a bomb exploded beneath his feet and he fell into the lake with the Red Princess because of pursuers, at the beginning of the manga. There, he meets a girl with the same name as his princess who shares the same face as the princess he had sworn to protect. Time and time again he proves his loyalty to the highschool girl who has no idea why he's protecting her with such loyalty. He refused to hurt Takezaki (Beni's father's secretary), who had suppousedly kidnapped Beni, only because Beni had told him that she did not want to see Kagetora kill anyone. Kagetora's self restraint shows when he is tazered by Takezaki but still does not fight back until allowed by Beni. While on a roof with Beni, where they had first met, Beni trips and falls off, he jumps over and the next thing they know, they're back to the past. He eventually realizes that he time warped into the time of her descendant, who looks very similar to her, and that he must love and protect Beni Fujiwara.